How a Big Mission will skyrocket your Business - Joan Carbonell Innovate or disappear. Kill or Die. Change or be changed. Disrupt or be disrupted. When we talk about innovation we're involved in a war. The only way to survive is to do it better than the others. If you do it you'll destroy your competitors and live for the next battle.

And the competition increases. Product life span shortens more and more every year. So if you survive this one, the next will be around the corner.

Yes. I must confess I've also used this discourse to motivate some CEO or Board of Directors to assume risks and launch innovation projects. Sometimes it's necessary to move them out of their comfort zones and make them act.

There are thousands of stories about disruption. New ideas replace old ones. If you are affected by a disruption you must carefully evaluate the risk and decide if it's necessary to adapt or no. If your prediction is not right you risk to be out of business soon or react to late and lose your hard-earned market share.

But there are other ways. Not every innovation needs to destroy existing markets and businesses.

Get out of this ultracompetitive world

As professors W. Chan Kim and Renée Mauborgne published in the 2005 book Blue Ocean Strategy (and its expanded edition in 2015) companies can succeed not by battling competitors, but rather by creating "blue oceans" of uncontested market space.

In traditional competition-based markets (the red oceans) growth is increasingly limited. Companies try to build advantages over the competition, usually by assessing what competitors do and striving to do it better in an endless loop. Companies need to create a leap in value for the company, its buyers, and its employees while unlocking new demand and making the competition irrelevant.

In fact innovation's ultimate goal is to create those new oceans. To open new markets where possibilities are endless.

In theory this is a clever approach; but in practice it may be difficult to achieve. How can you find new ideas to develop those new markets? How do we get those breakthrough ideas?

I suggest you start with your company mission and values. Your company mission should be something really, really big. It's not just to earn money for your shareholders. With an altruistic mission it's possible to build a better world while running a very profitable business.

There are many examples of companies that have used a big mission to run their growth.

Besides Apple's slogan "Think Different" the company has always been committed to the design simplicity. This idea has helped technology to reach most of the population. At the same time has allowed Apple, without being the pioneer in their fields, to enter existing markets and change the rules. This applies to both the world of computers and operating systems with the Mac and the mobile phones with the iPhone. In fact the mobile phone market in 2007, prior the iPhone launch, was considered saturated. The only hope for existing players to get good margins was to compete by offering attractive prices or better messenger options. The iPhone changed the rules and put in the pockets of the people something the was also a camera, video recorder, music player, geolocator and especially a platform for a whole ecosystem of applications. The future of the mobile market changed completely.

There's another relevant example with Elon Musk's companies: Tesla Motors whose mission is to speed up the advent of sustainable transport, SpaceX wants to enable people to live on other planets and SolarCity to achieve affordable and clean energy. Don't you share those dreams?

There are also nine large companies with annual revenues exceeding $1 billion who have made sustainability its flag: Chipotle, Nike, Unilever, Ikea, Tesla, Whole Foods, Toyota, General Electric and Natura. Those green giants have succeeded in doing what many thought impossible: they’ve made sustainability profitable.

Being ethical and environmental is not incompatible with being profitable / #Innovation

But having this altruistic goals is also applicable to any company in any sector. Imagine an airline that works for sustainability or a marketing company fighting child poverty or an IT company focused on improving human health. By raising those questions will open your mind to new possibilities.

Let's consider how GoPro technology or Niantic's Pokemon Go software application change patterns of sedentary behavior to a more active and healthy while doing their business.

How will it help your business?

Having a big, altruist mission will help you with at least 3 ways:

And this culture produces an exponential effect and pushes your business to grow exponentially. It's an endless loop: the more you work in your mission, the more your become a black hole that attracts similar minded customers and shareholders and this will give you more mass to generate more products, more value and achieve your mission.

Other missions can be also powerful but lack this powerful attraction force.

I think the best way to improve the world through innovation is to promote education. Improving education (and there's a lot to be done) is probably what can help the most to create a better future. Empower more brilliant minds and the effect will be exponential. There are NGOs that work to improve education worldwide (like care.org, take a peek).

I also use part of my free time mentoring people who want to improve their public speaking skills. This has opened the doors to also take part as a judge in a national Youth Debate League. Recently one topic of discussion was whether technological obsolescence was something positive. Some arguments use by those young people in favor and against that premise gave me a new perspective about an existing problem. I could use it to propose ideas to a client company to promote new innovations.

Decide which is your big mission. Make it really big enough. Quantify it and put it in front of your team. Associate any project, campaign, and initiative to this big mission. While you're building a better future for your company you're also build a better world.

Make your mission big enough. Build a better future for your company and the world / #Innovation 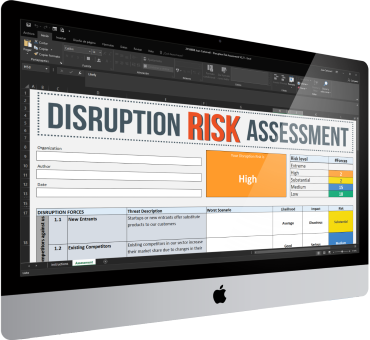 Quickly analyze, evaluate, and react to 37 possible disruption forces before it's too late for your business.

Loved this? Spread the word

Innovation today is a must for every company. But to manage innovation is not an easy task: it requires to boost creativity, leverage uncertainty, motivate teams, fight skeptics and always be prepared to fail and get back up. Joan Carbonell helps companies of all sizes to generate ideas, turn them into growth initiatives, keep the entire team motivated and continuously adapt plans as results are achieved. Joan also guides professionals on their way to become passionate innovation leaders.

Please log in again. The login page will open in a new tab. After logging in you can close it and return to this page.